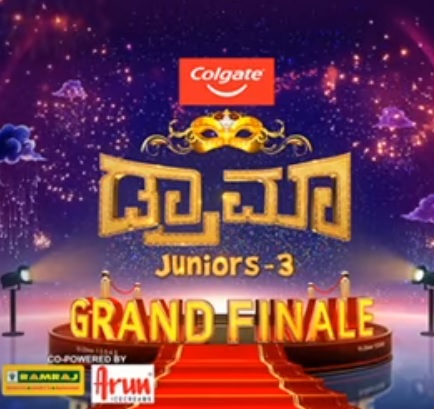 Drama Juniors is a Kannada talent reality show on the channel Zee Kannada which includes participant of the age group of 4 – 14 years. The third season of Drama Juniors had its premiere date on 20th October 2018. The show was hosted by a splendid personality Master Anand and the show’s finale took place in Tiptur. The finale day was initiated by Pooja at the Kalpataru Taluk Stadium and had gathered a huge crowd to witness the finale. The spectators did arrive at the venue in advance as they were fully enthusiast to cheer motivate and enjoy the super performance of their favorite contestants.

The esteemed panel of judges included Vijay Raghavendra, Lakshmi and Mukhyamantri Chandru who wished best of luck to all the finale contestants who were to set the stage on fire with their amazing performances. Moreover, there was a performance by popular Kannada television artist from the channel Zee Kannada who was Kamali Rishi, Paru Adithya and Surya who filled up all the gaps to entertain people by their marvelous dance performance. Check out the winners, Grand finale date and time of Drama Juniors 3 below.

Furthermore, in order to light up the night, there were singing performances held by the winners of Sa Re Ga Ma Pa Season 15 was the contestants Keerthan Holla and Hanumantha and Master Anand made the audience sing and dance with their outstanding performances. And the full entertainment quotient of the show raised its to bar by acts like Jugalbandhi and solo dances. All the performances held the finale night set their benchmark which was held on the beautifully designed stage which was built with a lot of efforts from technicians and labors. The sponsors of the Drama Juniors Season 3 were CJ Roy, Founder and Confident Group along with the three awesome judges finally concluded the show by announcing the winners of the season.