Humor works like medicine in our life and that is why we can see comic scenes even in the most serious movies. Doing comedy is not easy as it seems, making people laugh with your performance is a hard job to do. That is why; Start Vijay came up with the show Kings of Comedy Juniors. This is a stand-up comedy show where you will find small kids showing their talents and trying to impress and make the audience and the judge’s laugh with their comic abilities. Check out the complete winners/results and more details about the Kings of Comedy Juniors Grand finale below. 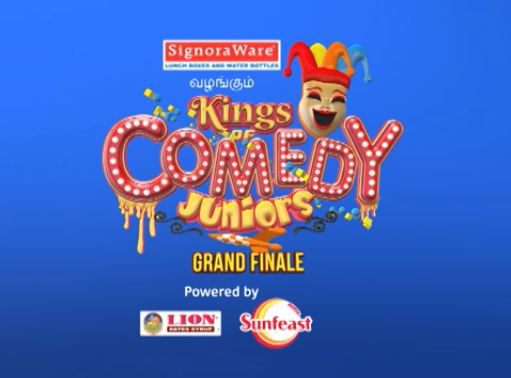 Winners of Kings Of Comedy Juniors

Date and Timing of the Grand Finale

The show is running for over five months and it has now reached the final stage. The final of the show is going to be aired on the channel Star Vijay from on 17th September 2017. The show will begin at 4:00 PM and end at 8:30 PM.

So, get ready to experience the best performance from the six finalists of the show and get the laughter of your life.

Beginning of the King of Comedy Juniors

This is the first season of the show King of Comedy Juniors and the show is telecasted in the channel Star Vijay. The show was started from 8th April 2017 and was aired at 8:30 PM on every Saturday and Sunday. From 24th June 2017, the show timing was changed to 07:00 PM. Even being the first season, it has got huge accolades from the viewers and as the show is in the final stage, we all are expecting for another season of laughter next year.

Host and Judges of the Show

The show is anchored by the stunning actress Priyanka who increases the glamour quotient of the show. The judges of the show are also famous artists and comedian who are working in the industry for decades and have the best experience to measure the performance of the artists. The judges are: –

Robo Shankar: – He is one of the best Stand-up Comedian India has got. He also does roles in Tamil movies. He has done stage shows in over 30 countries.

Rambha: – She is the superstar of both South Indian and Bollywood cinemas with over 100 films in different languages.

Sindhu: – She is the famous voice in Fever 104 FM (Hindi). RJ Sindhu also owns a film school in Chennai and train many students there. It is a lesser known fact that RJ Sindhu has a Guinness World Record for non-stop talking in FM for 6 hours.

So, with the bench of such talented judges, the contestants of the show are blessed with their expert suggestions and comments and are getting the best nurturing.

The six finalists who were selected by the judges and audiences are: –

You can expect a gala time of laughing in the final episode as each of the final contestants are best in the field of making people laugh and as it is the final, they will give their 200 % to give you the laughter of your life.