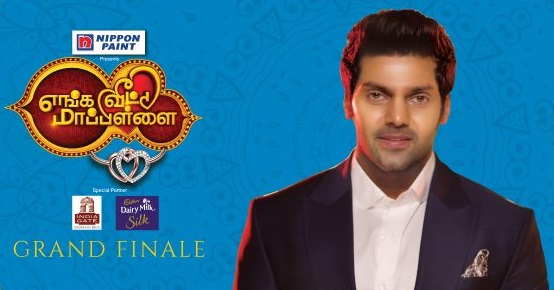 Enga Veetu Mapillai (EVM) is a reality show in which Arya will be hunting his wife from 16 female contestants and this is a Tamil reality show which started on 20th February on Colors Tamil channel. Some of the contestants were from other countries as well. The reality show was hosted by film actress and model Sangeetha Krish.

In last November Arya had put a prelude to EVM in which he addressed his fans about his search for a partner to settle down and this prelude was authentic. To be authentic, this is a the Swayambar Sabha of Actor Arya. The show is very related to the English reality show The Bachelor.

Arya has not selected the winner in the grand finale.

The Grand Finale of the show was held on 17th April 2018 and this is what the audience was long waiting for. Today finally Arya will be choosing his soulmates among last three girls who are remaining. Initially, it was 16 girls and then after severe scrutiny and shortlisting there were 5 girls remaining. The last 5 girls were Abernathy, Swetha, Susana, Seetha Lakshmi and Agatha. Now among then, it is only Agatha, Susana and Seethalakshmi are remaining.

Viewers have very high expectation about Arya’s choice and thus it will be finalized who will be the soulmate of Arya. The final winner will receive a grand token of love from Arya. In this final episode many VIPs and celebrities will be performing and among them, Gayathrie Shankar and some small TV stars will be performing. There were a lot of rounds and in these rounds, many contestants got rejected.

The timing of Grand Finale

The Grand Finale of Enga Veetu Maapilai will start from 8:30 pm and all will finally know the heartthrob and soulmate of Actor Arya. The dream someone will come true but Arya will announce his soulmate much later which makes the audience sad. Now time has come when the name of the finalist will be announced with much grand and pomp.

The show began in the month of February on Tuesday with 16 prospective life partners. Ladies dressed in beautiful lehengas and sarees walked down the red carpet. The contestants were all from the age group of 20’s and they disclosed their love for Arya. The ultimate prize of the show is none other than the Actor Arya. The set of the show was like a palace and the participants came in a chariot like Cinderella. It is known that the first few episodes were done in Jaipur Palace.

There were 40 episodes and the reality show was aired in Colors Tamil from Monday to Friday at 8:30 pm. This is one of the most watched reality show in Tamil. This would be the first season of EngaVeetuMaapilai. Arya will be choosing the most preferred partner among the finalists and he will give a very valuable token of love to her soulmate.