Jodi is one of the finest reality dance shows that is broadcasted in Star Vijay Television for many years. Now the show has become Jodi Fun Limited & there will be much fun on the show with many dance performances. There are many pairs going to perform dance in this reality show. Vijay Antony was the special guest in one of the episodes who also inaugurated the show. 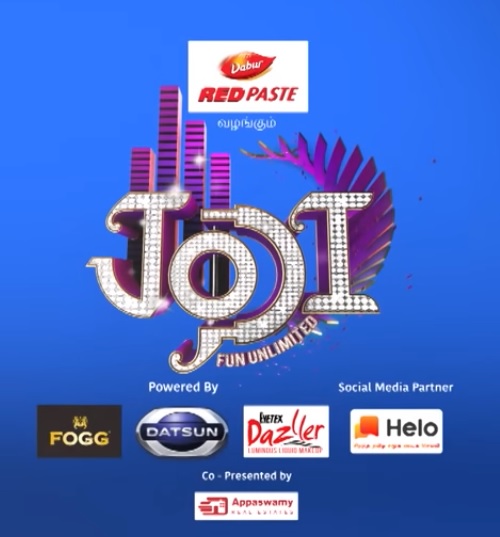 Jodi Fun Unlimited is broadcasted on Vijay TV Reality is one of the finest Dance competitions along with celebrities. The audience will see all new & fresh faces that will not only rock the floor but also compete with each other. The Jodi Fun Unlimited will be broadcasted every weekend at 8:30 PM.

Jodi Fun Unlimited has in all twelve pair contestants performing their dance on the floor. They are

Azeem & Shivani have been one of the best & most famous dancing couple in the Jodi Fun Unlimited. Audience love them & their dance on the floor. They also acted as lead roles in a television series known as Pagal Nilavu. The character names were Arjun & Sneha.

Rakshan & Jacqueline were the anchors of a reality comedy show named Kalaka Povathu Yaru. Jacqueline also appeared in Kola Maavu Kokilla along with Nayanthara. They were in the Divya Dharshni Team.
Aathish & Uthrawere the participants in Kings of Comedy Junior & Aathish was the winner of the show. Both were the junior stars & they have won hearts of audience & many people. They will also make sure to gear up good in the dance show.

Lokesh Baskharan is a prominent actor who has worked in many serials such as Kalyanam Mudhal Kadhal, Varai, Azhagu, Mahalakshmi & many more. He has also played negative roles in several serials with popular actresses. Meghna Vincent has also worked in serials such as Autograph, Indira, Parinayam & many others. She is also an excellent Bharatnatyam dancer. Meghna Vincent has also featured in reality Dance show named Dance Jodi Dance 2.0 in Zee Tamil channel.