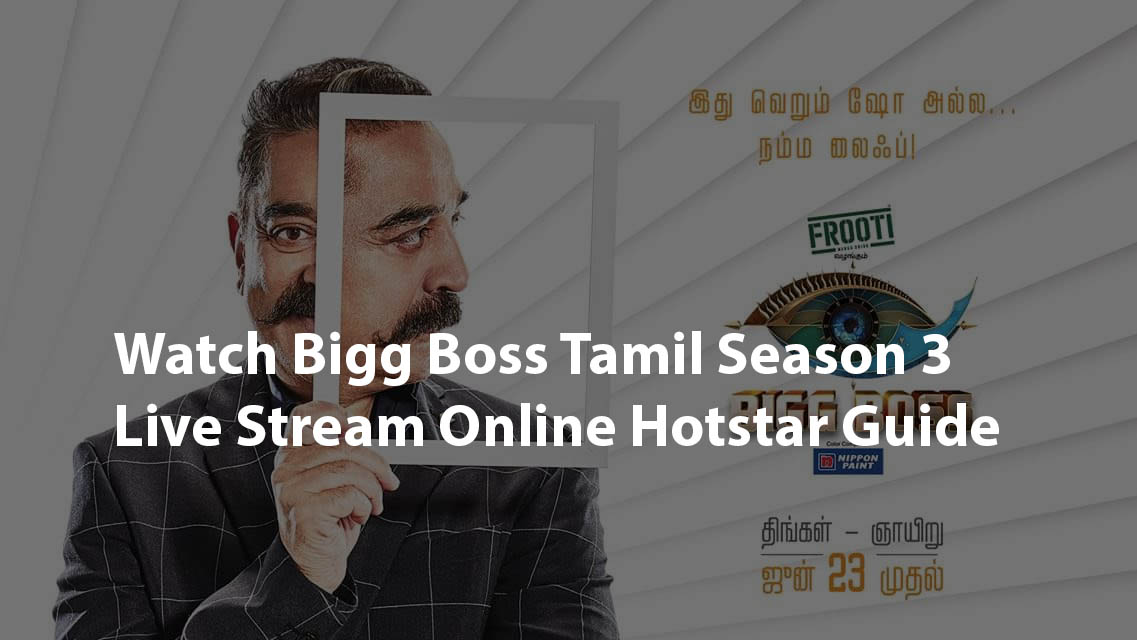 Bigg Boss Tamil is the Tamil version of the popular reality TV Show Bigg Boss in India. It is based on the Big Brother format. It was the first telecast in the Netherlands by Endemol. The Tamil Big Boss Tamil Season 3 will be hosted by Kamal Haasan, who also hosted the first season. The contestants (known as “housemates”) should live in a purpose-built house and they cannot any form of contact from the rest of the world.

Two housemates are nominated by the fellow housemates and eventually, one of them will be evicted. The housemate who gets the maximum number of votes will have to leave the house. In the final week, one housemate will be chosen as the winner from the remaining housemates. Unlike other versions of Big Brother, the Tamil celebrities and famous people contest as housemates, and no other members of the general public.

Special note: This is just a guide to watch Bigg Boss Tamil Season 3 online. We will not stream any live videos here.

Hotstar is the streaming option to watch the Big Boss Tamil Season 3. It is the mobile and digital entertainment platform in India. It offers over one lakh hours of programs and movies in 9 languages.

Hotstar has revised the price of its monthly premium subscription plan. The plan costs Rs. 299, up from Rs. 199 earlier. Hotstar app can be downloaded from Google Play and App Store.

How to watch Hotstar in the USA?

If you live in the US and want to watch the Big boss Tamil Version, then hotstar is the best option. Hotstar is just like Netflix. Hotstar is accessible in the United States. However, a lot of the Indian content has geo-restriction. But, don’t get disheartened yet. We will show you how to get unrestricted access to the Indian content on Hotstar India from the US.

If you are paying nearly $15 for the yearly subscription of Hotstar service in India to gain unrestricted access to all the premium content. You have to pay $9.99 per month or $9.99 annually in the USA, which is almost 7 times more than what you would pay in India. Moreover, you will not get total access to the whole library of the content. But there is a way to watch all the Indian content on Hotstar at the same price even if you live in the USA or any country other than India. All you need to do is use a VPN service.

A VPN will Geo-locate you virtually to India by connecting you to one of the Indian servers. With the VPN you can access the Indian version of Hotstar. VPN also ensures that all the online activities are secure and your internet connection is safe.
We recommend ExpressVPN since it is very stable, fast, and has nearly 2000 servers worldwide. its design is optimized for all the latest platforms such as FireStick, Windows, Mac, Android, iOS, etc. If you want to know how to watch Hotstar in the USA? we tell everything you need to know and get started with Hotstar. Keep reading!

The first thing you have to do is connect to an Indian location using ExpressVPN. Follow the steps below:

1: Download and install the ExpressVPN app
2: It has a 30-day money-back guarantee
3: Open ExpressVPN and connect to one of the Indian servers. Select the Location
4: Click ‘ALL’ tab and double Click on one of the servers on the list to connect to the server
Now sit back and enjoy.

The house is well-furnished and decorated. It has all the amenities required in today’s modern times. It consists of two bedrooms, a living area, a kitchen, a storeroom, a smoking room, four toilets and bathrooms. There is also s garden, a pool, an activity area and a gym inside the House. The house also consists of a Confession Room, there will be the voice of the Bigg Boss who is responsible for any kind of conversation, and the nomination process. The House does not have any TV connection, telephones, Internet connection, and clocks.

As in Season 2, Smoking Room will be also inside in Restroom and Jail were created outside of the Bigg Boss House for as punishment and Girl bedroom have officially had a bathroom for an emergency. The smoking room is replaced with a chat room.

Occasionally, Big Boss can nominate the housemates as a punishment for their wrongdoings, such as nomination by a person who has got special privileges (via tasks or other things), for breach of the rules. If the contestant has indulged in some serious offense, then the contestant may be

The housemates are nominated each week by other housemates. Viewers can vote their favorite contestant they would like to save from eviction. Viewers are entitled to cast 10 votes a day. The contestant with the minimum number of votes is evicted from the house. If any of the housemates break the rules of the house or is subjected to leave the house due to medical issues, they will be evicted.

The reality shows are only telecast on TV and on streaming channels. The shows are also available on other avenues.

All you need is a fast internet to stream the shows and a channel subscription to watch on TV.

Bigg Boss Tamil will be aired on Star Vijay, which is the official channel. The channel shows daily episodes containing the main incidents of the previous day.

The episodes of Saturday and Sunday mainly focuses on the interview of the evicted contestant by the host.

Hotstar is the streaming option to watch the Big Boss Tamil Season 3. It is the mobile and digital entertainment platform in India. It offers over one lakh hours of programs and movies in 9 languages.

Hotstar has revised the price of its monthly premium subscription plan. The plan costs Rs. 299, up from Rs. 199 earlier. Hotstar app can be downloaded from Google Play and App Store.