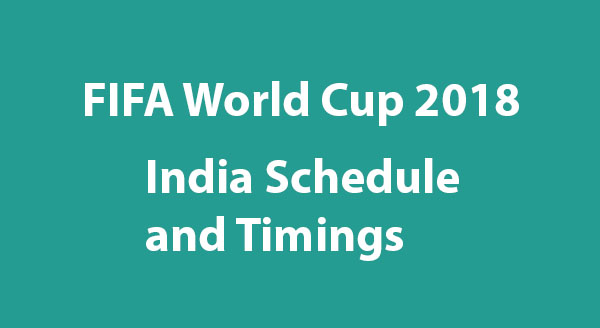 The Football World Cup is one of the most exciting sports events in the world, and it is going to happen again in 2018. 32 best teams will play with each other to show their skills in the field to become the world champion. Even though the wait for India continues to qualify for FIFA World Cup; the craze for the same never lessens in the country too.

All the last four matches will be played at Luzhniki in Moscow and Krestovsky Stadium in Saint Petersburg.

Even as India didn’t qualify for the FIFA 2018, the craze for the game continues in India also. That is why; a lot of people are looking for the complete details on the match schedule as per IST and how to watch them. Here is the full detail of the same.

In India, you can catch the complete action of FIFA 2018 with Sony Ten1/HD, Sony Ten 2/HD channels. You can also live stream the matches with Sony Live App or with the FIFA YouTube channel. The live streaming of the match will begin 30 minutes before the match timing. If you are outside India, just follow complete guide to watching Football World Cup live streaming 2018 here.

What is the Match Schedule as Per IST?

The complete match details are available in many websites, but the timing is not given as per IST. Now you can check the details here: –