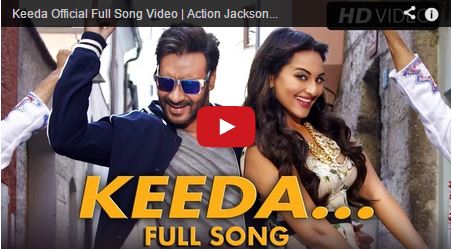 The Keeda song from the upcoming move Action Jackson is tending in social media and online websites. Action Jackson is an action comedy film starring Ajay Devgan and Sonakshi Sinha in the Leading roles. Yami Gautam, Kunaal Roy Kapur , Anand Raj, Sonu Sood and Manasvi Mamgai are the other main actors in Action Jackson. The trailer of the movie is also getting good responses in Youtube.

Prabhudeva is the director of Action Jackson and Gordhan Tanwani is the producer. Prabhudeva’s ABCD movie was a hit in the box office. Himesh Reshammiya is the music director of the movie. From the trailer we can see Ajay Devgan performing unbelievable stunts and actions. Check out the Keeda Song of Hiimesh Reshammiya and Neeti Mohan below.